In just a few short days in Cusco, the Kimbles have managed to turn a few heads.  Staying with our new family (we truly feel a part of Manuel’s family and are even going with them to visit relatives tomorrow), we’ve been able to witness the authenticity of their culture.  The touristy area of Cusco is about a mile and a half from our house, so we can be pretty far removed from that area whenever we want.

On the first morning of our arrival, we walked outside with Manuel and his father, Daniel.  They were showing us around their neighborhood and we quickly noticed something on top of the mountain behind their house.  Manuel told us it was a chapel and if we were interested, we could hike up to see it.  So, the following morning we took Sofi on a hike up the mountain to see this chapel.  It was a heck of a hike for Sofi, so in the interest of making sure she wasn’t too worn out, Karen waited with her near the top and I headed the last bit of the hike to check it out.  The views from the top were absolutely breathtaking. 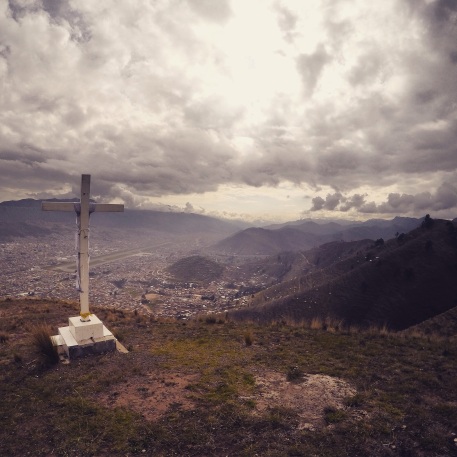 Perhaps even more exciting than the view, however, is the fact that several mountains are connected at the top and just waiting for me to run all over them in the coming weeks.  Later that night when we were eating dinner with the family, we told Manuel that we had hiked the mountain and that I had reached the chapel.  His response was epic: “Adam, you are most certainly the only gringo who has ever been to that chapel!”  Manuel uses that term in an endearing way to exhibit just how unusual it is to see us doing the things we are doing here.  I was happy to know that I had inadvertently set the FKT (Fastest Known Time) for a gringo to reach the top of that mountain.  And just this morning, Karen shared in that FKT as we broke our previous time and reached the chapel once again.

Which leads me to my next point.  It is clear to everyone here (people and dogs alike) that we are not locals.  When we trudged up that mountain, we had some not-so-friendly encounters with the street dogs.  For your reference, there are street dogs everywhere you look in Cusco, but the more territorial ones are up in the mountains where farmers use them to protect their land.  It’s one thing to walk down Avenida El Sol (the main street in downtown Cusco) with Sofi and get looks from nearly everyone we pass.  I can only guess they are thinking “A dog on a leash?  Whaaat?”  But it’s another thing to be surrounded by a group of growling street dogs who think you’re trying to steal from their owners.  Luckily, Karen has seen plenty of the Dog Whisperer, so she knows a few tricks to get them to back down.

Don’t let these guys fool you. They’re the nice ones.

Perhaps the funniest encounter we’ve had since arriving in Cusco took place on Friday morning. Karen and I went to attend weekday mass at La Catedral del Cuzco, the beautiful Cusco Cathedral in the middle of Plaza de Armas (the town square).  We went up to the cathedral to enter around 7:30 am but were stopped by a guard who told us that we could not enter until 10 am.  Fortunately Karen speaks some Spanish, so she was able to tell the guard that we wanted to attend mass and didn’t understand why we couldn’t enter.  The guard then let us into the cathedral, and explained that she had assumed we were just tourists trying to come in to take pictures.  I thought the longer hair and beard were going to help overcome my touristic appearance, but maybe I need a few more weeks to make that happen! 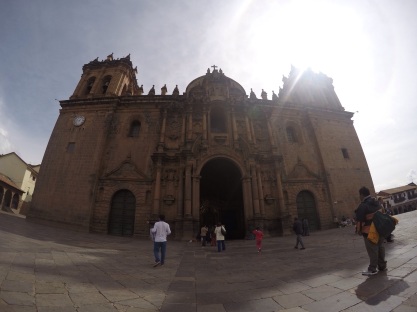 The beautiful Cusco Cathedral. Even prettier on the inside!

Having already accumulated a  plethora of interesting encounters, we are excited to see what comes next.  Just this morning I visited a market with Manuel and heard: “This is the market where all the locals shop.  You are the only gringo in here!” Our new goal just might be to become famous with the locals in Peru for doing things that no other gringos have done before!

11 thoughts on “Going Where No Gringo Has Gone Before”